I really don't understand drums, but these great Samples by Quatertone made me want to give them a try. If you can give them a test it would be much appreciated. There are over 2500 samples. The mod wheel controls the pitch of the Kick, Snares and Toms. The lower the mod wheel, the lower the pitch. Check this as when Kontakt loads up for me the mod wheel is always down giving the lowest pitch by default. The keyswitches alter the sound quite a lot. In general the lower white keyswitches are a louder more open sound while the black keys give things like a Cross Stick Strike. Be warned this is almost a gig download and takes about 500 megs of memory.


Sometime ago the brilliant Kontakt scripter EvilDragon created a fine Kontakt instrument using these samples. He was kind enough to give permission for old bigcat to host this drumkit. It is a significantly different and in many ways superior version to mine that you should try. 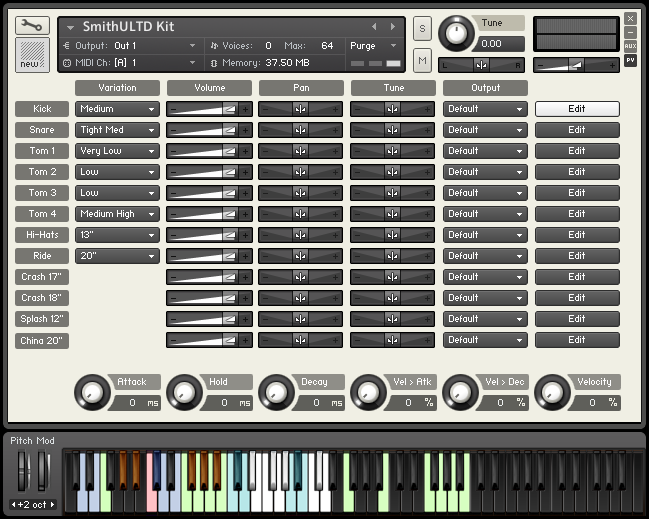 Based on Samples by Quartertone at Freesound.org
Licensed as Creative Commons Attribution 3.0, please give credit to Quartertone and Evil Dragon for these drums.

If you are looking for more free Drums check out this list from Bedroom Producers Blog.


And here's the other part of the Quartertone Rhythm Section. The Bass Guitar.

Based on Freesound.org samples created by Quartertone.  The license is Creative Commons Attribution. Please give that credit to Quartertone.

You can find the Quartertone Guitar below.
Posted by bigcat at 3:12 AM 2 comments:

Some time ago I was fortunate enough to work with Project 16's great bass samples on a Kontakt instrument. He mentioned to me that he had sampled his Sherwood guitar, but I was taking a break at the time with some shoulder problems so I never worked with these samples. I've also wanted to do more guitars with the script and shell that Mickaël Ménager has allowed me to use. His scripting of great effects works really well with electric band instruments like guitar, bass and electric piano.

So I decided to see what I remembered about making instruments and here is the result. The guitar is fully sampled (though I stretched the notes on the ends) and has 5 velocity layers. I made a few errors that I hope I've ironed out. It's been a while since I've worked with this many samples and this rather complex (for me) shell. If you find any problems please yell and I'll try to get them fixed.


Creative Commons Attribution License. You can use this instrument for any purpose but please give credit to Project 16.
Posted by bigcat at 3:05 PM 5 comments:

Freesound.org has lots of fun Public Domain and Creative Commons sounds that have been uploaded by the community. As you can imagine this is right up my street. I've used some before to make instruments, but I thought I'd put them all in the same place.

There is something called the Pablo Project which I don't understand on Freesound. It seems to involve uploading both good and bad samples of various instruments. I assembled the better sounding Violin samples from Kake85 into this little Kontakt instrument. It uses the WIPs script to add legato and vibrato.

This instrument is one velocity layer with about every other note sampled. It is Creative Commons Attribution, please give credit to Kake85.


TVerse put up a fun sample set called Bubblesound Octature Bass Multi Samples. I shortened it to Bubbles. He was kind enough to place the samples in the Public Domain and the instrument is the same, use it for anything you like.

Francesco Da Pyjama suggested this Kayageum from samples created by Spt3125.  The samples were placed in the Public Domain as is this instrument, so you can use it for anything you like. Be warned that I recently updated Kontakt because none of the Komplete instruments would work, so you will need the latest version too.

According to Wikipedia, This instrument is a Korean zither with 12 strings.


Another request was for the GMB Gamelan. Sampled by anamorphosi, the samples are Sampling+ which seems like an earlier CC license and requests attribution. So use for anything you like but please credit anamorphosi.

This Indonesian instrument features Gongs in Dark Blue on the bass end of the keyboard, Jegog in the middle in Green and Kantilan on the treble end in Light Blue. In general the Jegog and Kantilan have been put on the nearest white key. They don't conform to the western scale, so this is to give you a general idea of where the sounds are relative to each other and an approximation to the western scale. The lower two gongs are about correct, the upper two gongs are placed next to them for convenience.
Oddly I did another Gamelan about a year ago. You can find it here.

This piano has a crunchy feel. Every note or every other note sampled in one velocity layer. Samples by Goup_1. Creative Commons, please credit Goup_1.

As with most toy pianos,  the tuning is a bit negotiable. Fun little instrument based on Creative Commons samples by Poissonmort. Please credit him.


Another nice FreeSounds instrument is the Ldk1609 Violin.   I just put out a new and improved version... aka I fixed some mistakes.

The Quartertone Guitar is yet another FreeSounds creation. Some have criticized it, but its also been downloaded a lot for the limited time its been up. As with most digital guitars, a good amp helps.
Guitars are hard to get right. I've spent actual money for some and never been entirely satisfied. You can check out this list of free Guitars to see if you find something you like.