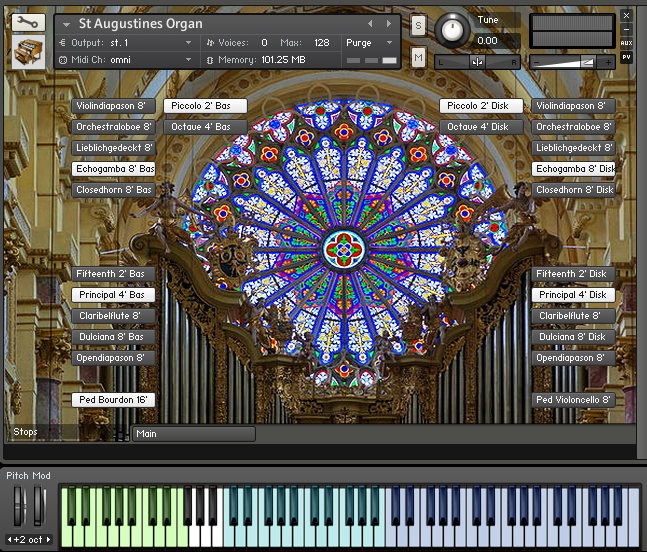 Here is the organ with separate patches for Swells, Grands and Pedals so you can easily play them on separate keyboards for that real organ feel. Note these don't have the samples included, you still need to download them from the link above. 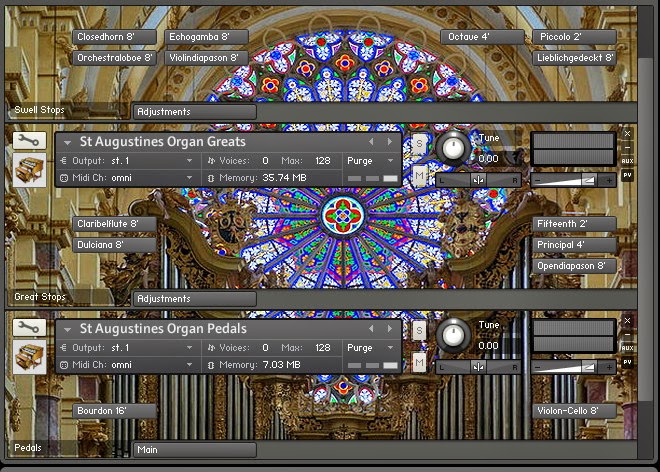 Note that when you start the organ there will be NO sound you must choose an organ stop. The left side controls the light blue keys, the right side the dark blue keys and the two bottom buttons are the green keys.  The upper buttons are the Swells, the lower button the Greats and two lowest buttons the Pedals. You can combine as many or as few 'stops' as you like.

Nick Appleton sampled the organ of St. Augustine's Anglican Church, Neutral Bay. I've turned it into an instrument for Kontakt 5. On Nick's website he gives a lot of information about then organ including its specifications.


The liscense is
St. Augustine's Neutral Bay, Hauptwerk Sample Set, (c) 2009 - Nicholas Appleton
http://www.appletonit.com.au/nickspage/ , pilo [at] tpg.com.au
You can download the full license (also included in the instrument) here but the important bits are the organ can be used to perform works commercially and I can create Derivative Works and redistribute them non commercially.

I've converted most of the MSLP instruments to Kontakt 5. I think it was about 5 years ago that Erick Kvist released this instrument collection. It is an impressive feat to create something like 15,000 samples. I thank him and the musicians who helped him for making these samples available to us. There are a number of beautifully sampled instruments here, such as the flute, the trombone and the cello and even those more lightly sampled are still fun sounds than can make a nice addition to your instrument library. Also for the kid in you, ten sampled toys.

Erick is back with a new website. It has the samples along with NN-XT patches for you Reason folks. MSLP Flute Grbavac - over 900 samples, 180 megs compressed. There are vibrato and non-vibrato modes with 3 velocity layers, round robin staccatos and more.


Note that the following are (hopefully) fun audio toys rather than serious instruments. They have one velocity layer and often the samples are too short.


Speaking of Toys here is a collection of sampled toys

Based on samples from the MSLP project created by ERICK KVIST. These samples are licensed under the Creative Commons Attribution non-commercial 3.0. From the read me.txt, "THE SAMPLES ARE FREE TO USE FOR ANY CREATIVE MUSICAL PURPOSES. YOU CAN SELL YOUR MUSIC MADE FROM THE SAMPLES. I ONLY ASK YOU TO (IF POSSIBLE AND CONVENIENT!!) GIVE THE PROJECT CREDIT, e.g. END TITLES OR CD SLEEVE.
OTHERWISE, DROP ME A LINE, I'D LOVE TO KNOW WHERE THE SAMPLES ARE BEING USED." So you can use these commercially if you were so inclined just credit Erick Kvist.
Posted by bigcat at 6:53 PM 21 comments:

Be warned these Kontakt 5 instruments involve some work on your part. You see the Philharmonia Orchestra has some nice samples but they forbid their distribution 'as samples or as a sampler instrument'. In order to comply with the wishes of the folks who have given us these fine samples, I created only shells distributing neither samples nor a functioning instrument. You can download a shell and then drop wave files with the appropriate names into the samples folder.

For example take the Pluck It Section of the Orchestra. you can download all three instruments together or the Banjo, Mandolin and Guitar separately. Then get the samples from the Philharmonia Orchestra, mp3 to wave them and drop the appropriate waves in the samples folder for each instrument. 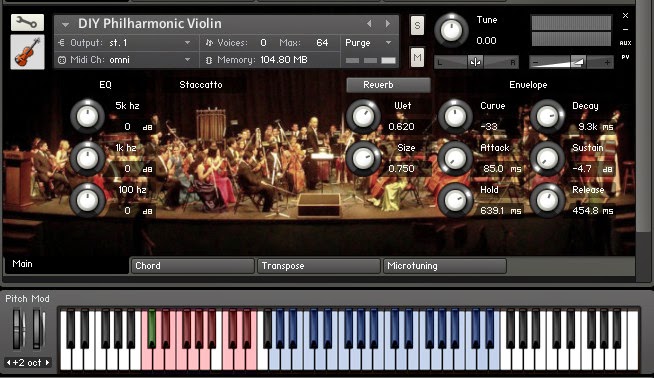 So far the brass instruments contain the 2 Second Instrument (the longest brass samples from Philharmonia last about 2 seconds), Instrument Old (these seem to be older, slightly low quality samples) and Instrument Phrases (trills, crescendos and such). Eventually I'll add in the shorter samples as separate instruments and all in one instrument control by the mod wheel.

Public Domain Picture from Wikimedia.
Posted by bigcat at 9:33 AM 27 comments:

D. Smolken was kind enough to allow me to create a Kontakt 5 instrument using his excellent double bass samples. You can find the samples along with SFZ mappings and lots of info and demos here .

The up and down Arco layers are now round robin rather than keyswitched which makes the instrument easier to use and generally sound better.

It has 5 keyswitches:
F4 is Arco (Bowed) Up, G4 is Arco (Bowed) down, F#4 Arco Effects such as creaks, groans and harmonics (he really sampled this bass)
A4 is Pizzicato (Plucked) with four round robins. G#4 is the Pizzicato Effects.

The original samples are © 2013 D. Smolken. This multisampled double bass by D. Smolken is licensed under a Creative Commons Attribution 3.0 Unported License. Consider this Kontakt version to be the same.  This instrument can be used commercially as long as credit is given to D. Smolken.
Posted by bigcat at 11:08 AM 2 comments: