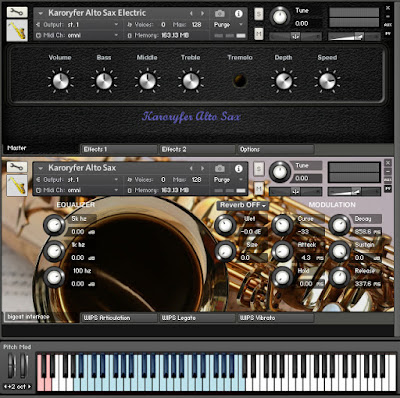 Soundcloud Demo
From the same mind that brought you this nice Cello, comes the Karoryfer Alto Sax. You can find it for SFZ at the Karoryfer site. Mickaël Ménager's script and GUI provide the Electrification of the Sax. For those who want a more traditional Sax, there is also a WIPs Kontakt version without an amp simulation on board.

Creative Commons: Karoryfer Sounds
Posted by bigcat at 9:48 AM 1 comment:

Jasper Blunk created these instruments. I did not, but he kindly allowed for redistribution as long as there was no charge.
The readme says "Can be used for commercial and noncommercial purposes."
See the included readme for more information.
Posted by bigcat at 9:46 AM 6 comments:

Mattias Westlund did an amazing job putting together the Sonatina Symphonic Orchestra for SFZ. While lightly sampled, the whole thing hangs together amazingly well given the wide variety of sources. This is thanks to layering, clever use of IR to place instruments in artificial space and other things I don't understand.

I have Kontakted the orchestra and added Big Bob's WIPs scripts. This should let you use legato, vibrato and breath controllers. The main problem is that with so few samples, you tend to get the 'shotgun' effect on solo instruments and there aren't many, if any, articulations. However for sections and background it works very nicely. Many of the multi instrument patches have a staccato articulation and most strings have pizzicato as well. 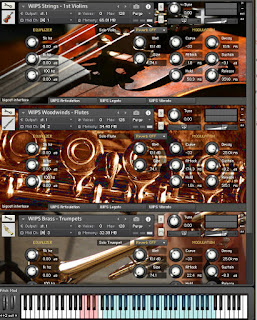 "SSO is a free (as in speech, and beer) library released under the Creative Commons Sampling Plus 1.0 license."
Posted by bigcat at 9:44 AM No comments:

I've been messing with the University of Iowa samples for a long time now. My latest toy has all of those sustain samples plus the sustains from the LDK1609 Violin packed into Mickaël Ménager's script and GUI. You can add all kinds of funky effects and amp sims to your orchestra from inside the instruments.
The Iowa samples are Public Domain. Please credit LDK1969 for the Violin.
The only thing missing is a Cello, which you can find here. Thank you D Smolken.
Posted by bigcat at 9:39 AM 1 comment:

There are lots of great samples recorded in his local church in Grebbestad, Sweden by music producer Tobias Marberger. If I understand right he made EXS24 instruments which some kind soul turned into old school Kontakt instruments. This makes my life making new Kontakt instruments much easier. Thanks to a buddy of mine for getting them to me.
I tried to make a basic GM drumkit from various elements.
Creative Commons with credit to Tobias Marberger.
Posted by bigcat at 9:31 AM 2 comments: 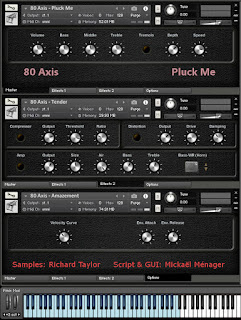 I've edited these synths to make them much tighter and more responsive.

Richard Taylor did a great job sampling analog synths and the nice folks at Freesound.org are hosting them. They were placed in the public domain which was very generous of Richard Taylor.

I'm calling the first one Axis 80 so as not to get sued, read about the real thing here. It has over 30 presets and weighs in at a touch under 2 gigs.

The Newtron 5 is an interesting modern synthesizer. This almost 2 gig download
has 19 presets including interesting arps and sounds that seemed designed to stack in interesting ways.

I used Mickaël Ménager's great script and GUI, so you can add effects like Tremolo, Phaser, Reverb and Distortion along with using half a dozen amps.

As a bonus:
AKWF The First Attempt
Adventure Kid is Kristoffer Ekstrand and he has sampled many wave forms and placed them in the public domain because he is cool like that.
As with the previous synths, the script and shell are by Mickaël Ménager.

Posted by bigcat at 9:27 AM No comments: 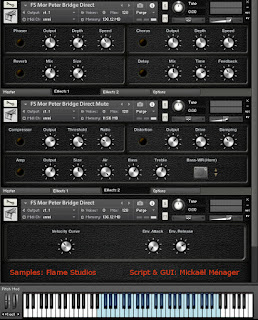 These are fairly simple versions of the Flame Studios guitars. The main instrument in each has three velocity layers with every note sampled. The mild version drops the most aggressive sample layer. Finally there is a mute layer. The Mickaël Ménager scripting & GUI work really well here as you can add some cool effects and amps right from the instrument.
Samples are from the fine folks at Flame Studios. You guys rock!
The license is GNU GPL.  Which means that I or anyone else can't charge you for a Flame Studios instrument, but you can use this instrument for any purpose you like, including becoming a millionaire with a hit song.