This instrument is from Brandon Clark. Let's let him describe it.
"Apparitions is my first excursion into the world of instrument development in Kontakt 5 using Joe Steven's generously made "B Pad." The sounds are dark and slightly cinematic in nature. Made from scratch, and free to use."

This instrument is Public Domain and free for any use.

A long time ago I made a little Kontakt instrument called A Pad.  Its been improved a bit and called "B Pad". So clever I know. A number of my friends have helped me create it and then Matt McKay updated and overhauled everything. Thanks guys.

It still works the same way. Name any wave file "A Pad.wav" and drop it into the B Pad Samples directory replacing the public domain demo sound from OLPC. Kick up the B Pad Kontakt instrument and there is your new pad with fiddley EQ, Reverb and Envelope Knobs on. Any sound becomes an instrument (of sorts).
You can also change the picture with another one roughly 640 * 250 in png format. Just click the wrench on the upper left, go to "Instrument Options", "Instrument" and then "Browse" for your Instrument Wallpaper. Feel free to free name it anything you like. It's totally public domain and you don't need to credit anyone. 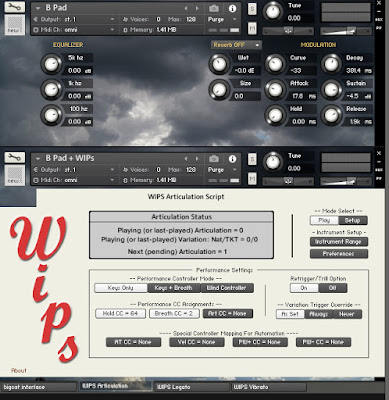 B Pad for Kontakt 5

If you want to mess about with the magnificent WIPs scripts from Robert D. Villwock, aka Big Bob. I've made a second B Pad that includes the WIPs scripts and resources and such. Big Bob is the creator of these excellent scripts and they are in no way modified, just included in the instrument.