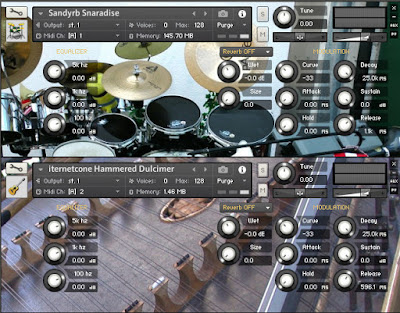 I haven't done much lately and am messing with some projects that aren't very fun, so I decided to take a break and browse Freesound.org. I bumped into a few cool things so I stuffed them into Kontakt.

Sandyrb generally recorded with 11 different microphones and between 8 and 11 velocity layers. Each snare is in its own octave with the different mics next to each other. There are over 600 samples and it weighs in at about 150 megs. Some of the snares are variations.

This on the other hand is quite small, with nine samples and one velocity layer. But is a fun instrument. It was sampled by iternetcone from his hammered dulcimer.

FaireDesVague Fretless Bass
FaireDesVagues sampled his Fretless Bass for Freesound. While we have plenty of heavily sampled basses (thanks Project 16), this lightly sampled one has a nice tone and a bit different sound. It has one velocity layer and about every other note sampled.

And now for something completely different. Sometimes in the middle of your Carnegie Hall performances you just want to break out some classic video game sounds. Now you can thanks to B_Lamerichs.

I really like these seven chimes that Selector sampled or created or something. They have a touch of magic too them.

You never know when a sword fight is gonna break out at your concert. Be prepared with the foley work of Mr. Derp.

This is part two of Freesound instruments,  find Part One Here.
Posted by bigcat at 9:24 PM 10 comments: