I've converted most of the MSLP instruments to Kontakt 5. I think it was about 5 years ago that Erick Kvist released this instrument collection. It is an impressive feat to create something like 15,000 samples. I thank him and the musicians who helped him for making these samples available to us. There are a number of beautifully sampled instruments here, such as the flute, the trombone and the cello and even those more lightly sampled are still fun sounds than can make a nice addition to your instrument library. Also for the kid in you, ten sampled toys.

Erick is back with a new website. It has the samples along with NN-XT patches for you Reason folks. 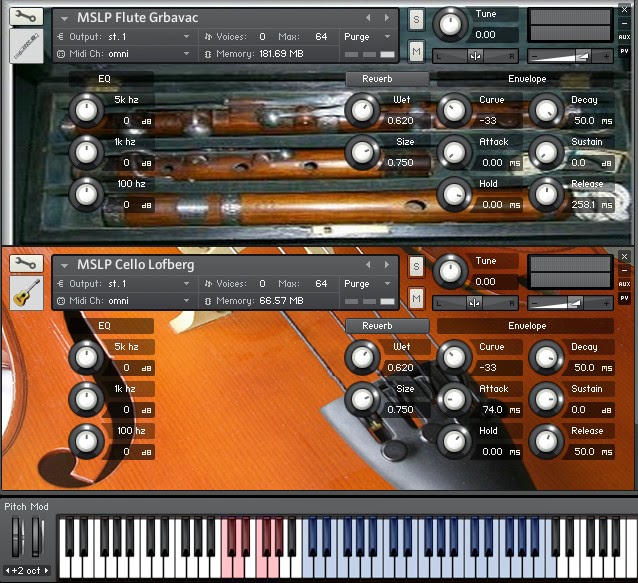 MSLP Flute Grbavac - over 900 samples, 180 megs compressed. There are vibrato and non-vibrato modes with 3 velocity layers, round robin staccatos and more.


Note that the following are (hopefully) fun audio toys rather than serious instruments. They have one velocity layer and often the samples are too short.


Speaking of Toys here is a collection of sampled toys

Based on samples from the MSLP project created by ERICK KVIST. These samples are licensed under the Creative Commons Attribution non-commercial 3.0. From the read me.txt, "THE SAMPLES ARE FREE TO USE FOR ANY CREATIVE MUSICAL PURPOSES. YOU CAN SELL YOUR MUSIC MADE FROM THE SAMPLES. I ONLY ASK YOU TO (IF POSSIBLE AND CONVENIENT!!) GIVE THE PROJECT CREDIT, e.g. END TITLES OR CD SLEEVE.
OTHERWISE, DROP ME A LINE, I'D LOVE TO KNOW WHERE THE SAMPLES ARE BEING USED." So you can use these commercially if you were so inclined just credit Erick Kvist.
Posted by bigcat at 6:53 PM